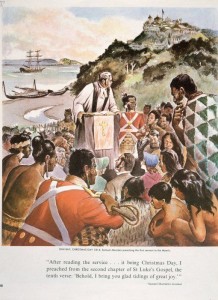 Samuel Marsden was born in 1764 in Yorkshire, England, the son of a tradesman. He went onto Hull Grammar School and then St John’s College, Cambridge University.

Marsden later served as a chaplain in New South Wales,  Australia  “I am surrounded”, he wrote in his journal “with evil-disposed persons, thieves, adulterers, and blasphemers. May God keep me from evil, that I may not be tainted by the evil practices of those amongst whom I live”

Marsden and his wife Elizabeth had many visitors in their home, including New Zealand Maori who visited NSW from time to time. He came to respect the Maori’s intelligence and capacity to learn and started thinking about the possibility of mission work in NZ.

In 1814 Marsden, having purchased a ship {the brig Active} with his own money, sailed for the North Island of New Zealand.

On Saturday 24th December  the Active sailed into the Bay of Islands, horses and cattle were landed. Marsden rode a horse. Ruatara, a young Maori chief who Marsden had befriended, prepared for the first ever Lord’s Day and Christmas Day service.

Half an acre of land was fenced, a pulpit was raised in the center, six feet above the ground. There were some upended canoes for the Europeans to sit on. A flag was then raised above the village, which was to mark the Lord’s Day as a day of rest and worship.

The next day everyone took their place in the enclosure. This was to be the first Christian worship service in New Zealand – at Oihi Bay, Rangihoua, Bay of Islands.

I was talking to my wife Jenny about dressing up as Samuel Marsden. She likes a beard and always says they look better on me than on her! It’s summer here in Christchurch and getting warm now, so I said “how about I shave it off…I’d look more like Rev. Marsden then!” To which she said ”yeh no. You’re the wrong colour anyway!” {From the paintings of him produced at the time he was of a pale complexion}.

Well Samuel Marsden and I have more in common that you might imagine. Both born and raised in Yorkshire..e by gum! He went to school in Hull, I went to Middlesbrough. We both went to Cambridge University… John’s College for him, King’s College for me. We both travelled to New Zealand. He was an ordained church minister, so am I. He came to bring good news 200 years ago, and I’ve come to bring the very same good news.

In the first sermon preached, Samuel Marsden spoke on Luke 2:10 “Behold, I bring you good news of great joy” – as we remember the Christmas of 1814 – 200 years ago – I’d like to bring a message to you from the same text…

Samuel Marsden wrote of that first NZ Christian worship service “The inhabitants of the town with the women and children and a number of other chiefs formed a circle. A very solemn silence prevailed–the sight was truly impressive. I got up and began the service with the singing of the Old Hundred Psalm, and felt my very soul melt within me when I viewed my congregation and considered the state they were in”

In the 1800s Maori tribes worshipped their own gods, often treated their slaves and captives of war with cruelty and practiced the tribal customs of revenge (utu) and cannibalism. The European sealers, whalers and traders were not in their behavior unlike the convicts Marsden had ministered to Australia who he described as “evil-disposed persons, thieves, adulterers, and blasphemers”. Some of the clergymen were far from ideal too, one had an affair with his servant girl, another was regarded as being “hasty and injudicious, warm in his temper and unstable”

How about us here today? What state are we in?

The reason I ask is that before you can hear the good news, you need to hear some bad news. Let me explain..

Imagine that I told you that I knew of an excellent doctor…able to diagnose and cure terminal diseases..

If you knew that you had a terminal disease and you’d tried many different remedies without success, then you’d want to hear the news of a physician who would most certainly be able to cure you. You’d want his contact details and you’d make an appointment just as soon as you could.

However, if you didn’t know that you were sick, you might be mildly interested in the news. You might think of someone else you know who could benefit from seeing such a doctor, or you might reason that knowing about such a healer could come in handy in the future, should your health deteriorate.

I have some good news for you, but it’s news you can only understand if I firstly give you some bad news.

You have a terminal illness. We all have. It will kill you. You will die.

What is this, you say? A widespread cancer, something in the city water supply, radioactive particles in the air we are breathing?

No it’s worse than all of these.. It is rebellion against God your Maker…

Perhaps you fit into one of these groups:

Well here’s the bad news: to get into God’s heaven you need to be perfectly good. Absolutely holy, never having done wrong or thought wrongly. Anything less is enough to separate you from God forever..

Do you know that you are naturally in rebellion against God?

The shepherds did and that’s one reason why they were so afraid of God’s messenger:

But the angel hadn’t come to tell these shepherds just what losers they were {keeping sheep in the open fields in 1st century Judea put you right near the bottom of the social scale}.

The message was “Fear not, for behold, I bring you good news of a great joy that will be for all the people”

Behold…look!…see! – give your attention to…

What is the good news?

Luke 2:11-12 “Today in the town of David a Savior has been born to you; he is Christ the Lord. This will be a sign to you: You will find a baby wrapped in cloths and lying in a manger.”

How does God to this?

Through this baby born to a virgin in Bethlehem, the town of David. You see this baby did not stay a baby, he did not stay helpless, physically weak and needy, but he grew up. Very much as you and I do. But with a difference. He grew up perfectly. Never doing or thinking anything wrong.

Christ Jesus has another name, from Isaiah 7:14 “Immanuel” that’s Hebrew and it means “God with us”. You see Jesus was born human, but he remained divine.

At Eastertime we remember the death of this Jesus; a death he could easily have prevented, but yet did not resist those who hung him on a cross to die painfully. He died so that the terminal sickness which affects all people, like you and me, could be cured. He died so that you could live beyond your grave, just as He now lives beyond His.

Well, I could tell you about a physician who could cure your sickness which is unto death…

But that wouldn’t help you unless you went to see that doctor.

So I want to invite you to come and see Christ, the One who can truly heal you so that you can live forever. Will you accept the invitation?

Perhaps you’re wondering how you could do this?

Talk to me or one of the members of this church and we’ll show you the way.

That’s what Samuel Marsden did for the people gathered on that Northland beach 200 years ago. It was Ruatara who translated the message for the Maori and over the coming years this good news was passed on person by person as the message spread.

The message is the same today. There is a Saviour who can make you right with your Maker. There is a way into heaven for people who have no right to be there, people from all walks of life, from all nationalities, of all ages. This Jesus is alive today. He is the Great Healer and he invites you to come to Him this Christmas time, just as you are, with these words:

Matthew 11:28 “Come to me, all you who are weary and burdened, and I will give you rest. 29 Take my yoke upon you and learn from me, for I am gentle and humble in heart, and you will find rest for your souls. 30 For my yoke is easy and my burden is light.”

More than these Christ Jesus the Savior, the heaven-born Prince of Peace. Peace for rebels like you and me.